Exactly one year ago I started my blogging journey. I’ve put myself out there to the world and exposed myself as a mum, wife, daughter, sister and friend. I’ve covered parenting topics from breastfeeding to middle child syndrome, I’ve shared my highs and lows with you all. I’ve captured moments of my running achievements and posted pieces about my cake creations and my love of decorating and fashion!

Blogging for me is a great hobby where I can release my inner thoughts and a perfect way to capture my life as it stands. I started blogging in the hope to help people! As a teacher I love to offer something to someone and help them to learn and as my blog’s caption says ‘life is about learning’, it’s nice to know that someone out there could be learning something from the pieces that I write! And even though I started blogging to help people, it also didn’t phase me if only a few people here or there read my posts as it’s a great memory for me to always look back on.

I remember when I posted my first blog, within hours I had people respond…it was a bit weird at first! But from one blog to the next, it became a natural routine of my week! And I’m happy to say that so far I’ve had nothing but positive feedback and a wonderful supportive audience who I appreciate them talking time out of their busy schedules to read what I have to say!

To celebrate my year’s journey, I’ve included my top 5 most read blogs over the year and my top 3 that I loved the most!

My favourite top 3:
Number 1 – In the name of ‘love’
Number 2 – Bond of sisterhood
Number 3 – End of Breastfeeding

I hope you enjoy reading over some of my favourite blogs that I’ve written. I can’t believe I’ve posted over 100 blogs now! When I was choosing my top three there were pieces I went through that I forgot I’d written about…always such a wonderful memory of what has been achieved! Once again thank you for your constant support it’s always warmly appreciated! I look forward to sharing more of me and my Party of 5’s life over the coming 12 months!

5 months ago I decided to start my own blog. The idea came from a thought when I was out running. At first I had plans to create a fitness fan page on Facebook to help motivate other mums who were trying to get their bodies back after having their families. But after talking to my lovely Neighbour Lolly, she suggested blogging. What’s that I ask? Technology is obviously not my biggest strength in life!

After procrastinating for a bit, I decided to give it a go. Lolly helped me create my blog and start me on this new journey – a big shout out to her:) The idea of me starting a blog was to have somewhere to write my life stories and to have someone read them and judge whether my writing is good enough to read! This being because I’d love to write a book one day!

It took me a little while to establish a routine and discipline with producing pieces that sounded good enough to read. I haven’t hit a brick wall with topics yet, everyday something pops up and I write it down. But I am amazed at how much I love blogging. I always preferred maths when I was at school and writing assignments was never something that sparked an interest for me, but now I consider myself a writer!

I’m very appreciative of the support and positive feedback that my audience has given me. Whether it be about the quality of my writing, the layout of my blog or how the pieces I’ve published have been truly touching has enabled me to write with confidence.

Another moment of me not keeping in touch with technology….when Lolly asked me if I was interested in making money from blogging I answered with “can you do that” lol! How did I not know this? Have I been hiding under a rock or something? Lol I never envisioned making money from publishing my blogs. Like my blog’s caption says ‘Life is about learning’ and if I can teach someone something from reading my blogs than I feel like I’ve earnt something by doing that! But recently I received an email from two companies who read and loved my blog and are willing to give me a go! Surprised I surely was, chuffed as well!

It’s nice to know that what I’m writing is worth reading. My aim now is to keep building my audience! With each blog brings about new followers and now that I have started a fan page on Facebook and linked my blog to Twitter and Pinterest, hopefully this will attract a broader range of followers as well! My latest edition to my blog is my logo. I created this to use as the face of my blog….something that people will remember!

So where to from here? I’m just going to keep on living and blogging! Since starting this journey back in March, this is my 31st published piece and I have had over 3500 views of my blog by people right around the world! Hopefully one day my blog is highly recommended around the world, but for now what I’ve achieved so far is a great starting point!

My logo I created for my blog:)

Head over to ‘My Party of 5’ fan page on Facebook and ‘like’ my page to keep up to date with everything relating to my blog:)

Middle child syndrome. People say it’s just a myth and maybe it is. Maybe it doesn’t exist in every household, but it certainly does in ours!

When Sienna was born she was everything everyone in our family longed for! After having 3 rowdy boys, my sister who lives in Melbourne had twins – a boy and a girl….finally a granddaughter! But we still had all these boys in Brisbane, but at 11.57am, on the 30th of June, weighing in at a whopping 10 pound 2, our little Sie Sie girl was born and everyone was over the moon that a second little granddaughter was to join our family! She was a beautiful baby:) When I gave birth to her I pulled her out and she was placed on my chest and there she stayed with her eyes wide open, not crying, just looking around and checking out the world and the life she was about to embark on!

Bailey and Sienna were inseparable from the minute she was born. There is two years and four months between them but that gap has always felt much closer! Their personalities complimented one another for a while there, as Bailey was always so highly strung and Sienna so placid and easy going. Sienna was seriously the best toddler that you could come across and many a times while Bailey was having a moment, I would turn to Sie Sie and her beautiful beaming smile would let me know that everything would be ok….she was my shining light in a moment of darkness!

I always wanted three children, but when Sienna started having all her ear problems like Bailey and then when she turned 2 life started to become easier, our thoughts suddenly turned to – do we really want to upset the apple cart?? Then unbeknown to us I was actually pregnant at Sienna’s 2nd birthday party! I was never worried about middle child syndrome, it was Sienna the most carefree child, how could she ever be affected by anything?? Didn’t things change….! Sienna and I have always shared a special bond right from the minute she was born and one of the first thoughts I had when I found out I was pregnant, was “Sie Sie won’t be my baby anymore:(!” Being a parent feels like a constant guilt trip and this was one of those moments!

During my pregnancy, Sienna loved being involved with my growing belly and was always so fascinated by the whole baby thing and never seemed jealous at all! I made sure I included both the kids in everything as I didn’t want them to feel left out! Bailey was verbally disappointed when we found out we were having a girl, but Sienna was happy to be getting a little sister. I was about 35 weeks pregnant when Bailey started prep and this was the day that my quiet, placid, easy going girl disappeared and even though she is still in there and comes out every now and again, her heart from the day her little mate went to school, was left with a hole in it! Then if that wasn’t big enough, a few weeks later she became a big sister to Mia! That’s a lot for a little person to process and deal with! This is where middle child syndrome started to come out in our house! 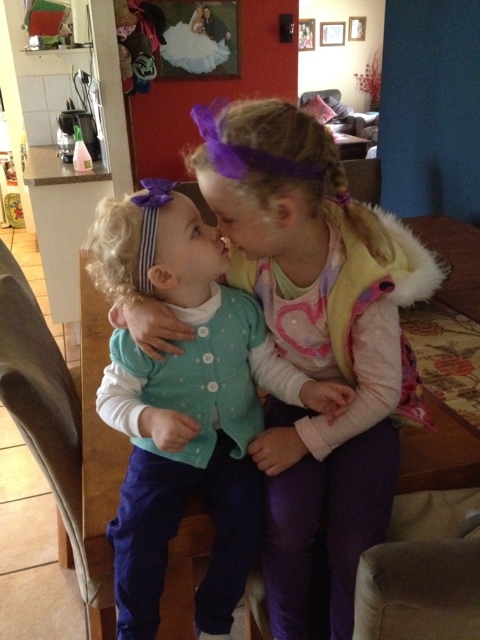 In my opinion when you have 3 children middle child syndrome seems somehow unavoidable! I’m very conscious of it and tried everything in my power to eliminate it from happening, but somewhere along the way, when I was dealing with a reflux baby and a tired prep student, Sienna become lost in it all! Everything became all about Bailey starting school and along with that came special performances and fetes, homework and awards….Bailey, Bailey, Bailey! Then of course everything is about the baby because they are the most dependent child in the house….Mia, Mia, Mia! No wonder Sienna would just sit and scream at us if she didn’t get her own way! My placid girl who had never chucked a tantrum before the age of 2 and a half, turned into tantrum city, attitude plus and this affected everything then – including her sleep! It was just a spiral of events for a while there!

These days my little Sie Sie girl still suffers from middle child syndrome. She idolises her big brother and little sister and tries so hard to impress them both all day! She often gets her heart broken by both of them which breaks my heart to see! And we still deal with some behaviour issues, but in general she is a pretty good girl and has improved since starting preschool at the beginning of the year. I make a point of spending one on one time with her, as out of the three of my children, she has missed out on the one on one time that Bailey had before she was born and Mia will get when Sienna goes to prep next year!

Next year is Sienna’s year! She starts prep and I’m going to let her choose a sport of her choice. She spends all her time supporting her big brother at his school functions and football matches, it will now be her time to shine and shine she will! No matter how being the middle child has affected her, she is still my shining light in a dark moment. When Bailey is having a melt down and I’m cleaning up something of Mia’s for the 100th time, my middle child is always right behind me telling me “I’m being a good girl for you mummy!”…..god bless her cotton socks:)! 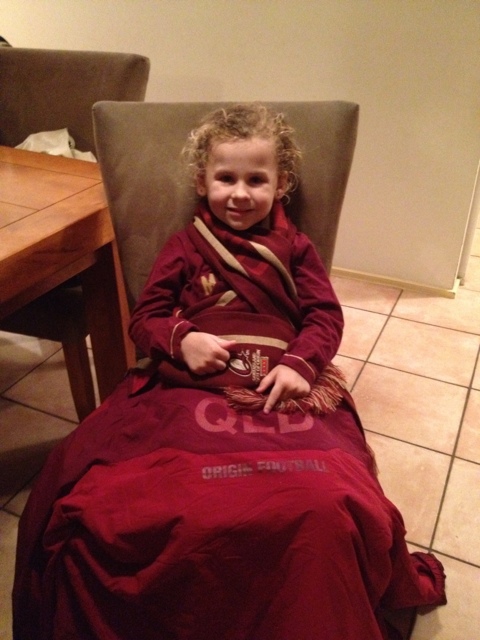