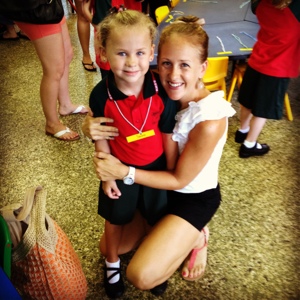 It’s been a week now since school resumed and a new cohort of preppies begun their journey into education! How’s your little preppie going? Loving it? Hating it? Upset? Mine…not as good as I’d hope:/

I always knew in the back of my mind that Sienna may get a little upset when leaving me. 12 months ago when she started preschool (which was the first time she’d gone anywhere) she suffered terribly from separation anxiety! Like prep, she is always happy to go, but the thought of mummy leaving her cuts to her core! But I thought she was going to settle ok. She has come so far since the first day she started preschool. She was so excited when we were buying her uniforms and essentials for prep and wanted to try it all on everyday in the week leading up to school starting. She told everyone we saw “I’m going to prep…finally I’m going to big school like Bailey!!!” This was making me confident and at ease…but I still had a feeling!

I was waiting and watching for signs in the days leading up to starting prep. But there was nothing other then positive talk and excitement…I actually started believing that maybe she was going to be ok! The first morning of school she was super excited and organised! She was up and dressed by 6.30 lol! There was no sign of distress or anxiety. We got to the school and still ok. But then between the gate and me taking Bailey to class she lost sight of me for a second and that’s when it started. The tears started to flow and “I don’t want you to leave me mummy” was what she kept telling me!

My heart sunk. I was a little surprised, but apart of me knew it was possible. But then something came over her. Once she walked into her prep room (which is like home as my nephews and Bailey were in the same class) she put on her big happy smile and was so relaxed. We did puzzles together and she waited patiently for Mrs Hollier’s instructions. But I was waiting for it…and it never came. She was fine. I left with her smiling and waving “bye mummy!” what a relief…I was so proud of her!!! When I arrived to pick her up, I asked her teacher how her day went and she said there were a few times where she was teary but not too bad… Phew! I was relieved!

The second morning was just as great. Sienna was happy to return, settled beautifully again with her smile and “see you this afternoon mummy!” Only once during the day she was emotional. I was so stoked! I actually Was letting myself relax and believe that thank god two out of two children have settled into prep with no major dramas. Then day three hit. She didn’t want to eat breakfast, getting dressed in her school uniform wasn’t as exciting and although she had another excellent drop off with no tears, she cried on and off all day;(

After lots of chatting and reassuring, I was certain Friday, her last day of her first week was going to be successful, but it was worse;( For the first time she cried when I had to leave, she cried on and off all day to the point her eye was so red when she came to greet me in the afternoon and she hardly ate all day;( I started my weekend feeling quite distressed about it all….and so different when I’m usually on the other end:/…being the teacher in this situation is so much easier I tell you!

We went away for the weekend and I let her have heaps of time where we didn’t talk about school…I just wanted to see her relaxed. Her belly must have been churning so much during the week that I felt it was important to just leave the issue alone. When I did ask her why she cried all the time, her response wasn’t because she had no friends or because she didn’t like school or her teachers, her response was “because I missed you all day!”…god bless her cotton socks! And it is just that, because every afternoon when she sees me I get the biggest kiss and cuddle and she spends the first 5-10 minutes gazing at me and is as happy as pig in mud…it really is lovely to be loved!!

Now we are in the second week, she is no better, in fact worse in some ways. Monday morning was the hardest of all. She had to be pulled from me screaming “mummy I want you, I don’t want you to go:(!…just one more kiss mummy;(!” It literally broke my heart. I shed some silent tears, but my little darling girl will never know this! It’s so important as the parent to put on our brave face, breathe deeply and walk away, even though you just want to hug them tight and sit with them until they stop crying! I was so grateful that the school rang to tell me that she had settled nicely and was having a good day…what a relief! There is nothing worse than knowing your child is away from you and feeling upset…one of the hardest parts of parenting!

Three days into the second week and she has cried every morning, but her days are becoming more and more settled. As much as it sucks that the drop off isn’t pleasant like it was with my son, I’m content that she is settling and participating socially and academically during her school day…and eating her lunch! My aim now is to not let it get to me, I will give myself a nervous break down if I think it about it too much. So now I go and do her jobs and a puzzle with her and give her one kiss and cuddle and make a quick exit…it’s the quick exit that makes the teacher’s job a lot easier! I know she is in good hands and I just have to trust that. I know she is starting to improve, at least this week she is eating her breakfast without complaining she has a belly ache:/!

Ahhh separation anxiety. It really isn’t fun for anyone involved. It’s quite common in little ones and when you think about it it’s not a bad thing, all they are doing is missing their mummy and daddy! I know exactly how Sienna feels as I suffered it as well and even now I don’t like being far from the ones I love the most! There is nothing more we can do mummas other than keep positive, encourage them to be brave and reassure, reassure, reassure. Time is the essence in this situation and they will eventually settle and learn to be ok with saying goodbye.

Everyday Sienna tells me she missed me and although I can’t wait for the day she is super excited to be at school from the minute the first bell rings, for now I will take comfort in that at least I know she loves me and it is always so lovely to be loved!

Keep strong mummas who are also going through the same situation…we can do this and it WILL get easier and one day we will look back on this as just a memory with lessons learnt:) our little ones will settle with time!