Hands up if you’ve had enough of this unpredictable weather that keeps cycling virus after virus around? 👋👋👋 Triple hands up for me!!! This winter has been long and painful. It’s been cold, windy and so up and down!! This week is our 6th week of someone in our house having some sort of virus or infection and I hate to say it but it’s taken me down too!!

6 weeks ago, Mia woke early hours of a Saturday morning vomiting, which took its turn through all the kids for the next week. Since then we’ve been hit one by one with something and some of us more than once. It’s seen Mia with an ear infection which has left her temporally with some hearing loss, Bailey had the most horrific sinus infection, Sienna now has a bad case of tonsillitis to the point of vomiting and I’ve spent most of this week curled up on my lounge as my chest and voice recover from the flu!

This has been our worst winter in a couple of years. I haven’t been this sick in a long time and when I do get a cold, cough or flu usually I can soldier on and get over it in a few days, but this time I had to call it! I started getting sick last Tuesday at the end of my working week. I ignored it for a few days and kept telling myself I’d be fine like all the other times I had a bit of a cold. I never felt bad enough to put myself to bed, but in an instant by Friday lunch time my voice started to fail! I know some of you must be thinking (that must of killed me lol) and by the time I got to Sunday and I kept telling everyone “I’m fine, I’m not sick”, by the end of Father’s Day I finally called it and said those two words out loud “I’m sick!!!”

I hated saying it, but for my own health and well-being it had to be said. My body was obviously telling me it was completely exhausted and needed rest. So that I’ve done, especially after I was ordered to by my doctor. This week I’ve been getting up each morning, getting the kids ready for school, dropping them off in the drop off zone and then coming back home to resume my spot on the lounge. This time forced my body to recover properly and truth be told if I had of done this a month ago, when I originally had a bad chest, I probably wouldn’t have ended up so bad. And I’m very pleased to say that after having the final season of McLeod’s Daughters sitting in the DVD draw for 5 years, I’ve finally watched it, enjoyed it immensely and cried many times like a big baby lol – oh Alex why did you have to die 😢😢😢!

Time like this always makes me reflect. Reflect on what’s important and what’s not. It’s eased away the cloud of smoke that’s been hanging around me for a bit. It’s recharged me and turned on that light bulb that I felt went out. It’s given me the energy I need to get through the rest of this year, which is always the most busiest time as we approach the festive season. This week has been a rough one, but we got through it together – and as for my husband…he’s awesome!

As a mum, we are always putting everyone first. We do to please. We plan in our sleep. We start a new job before we have finished our last. We are a taxi service, cook, cleaner, nurse, therapist and referee. We are everyone’s everyone, but sometimes, just sometimes we have to stand up and call it that it’s ‘that time’ where I need to rest and recover. Know your bodies mummas, know when to call it…you’ll thank yourself for it!

So as the winter months are now behind us, I prayer that this is the end of a long road of sickness for us and anyone else who has had the same sort of winter and by the sounds of it most of Brisbane have been living the same hell! Bring on summer I say and lots of sun, sand and swimming!!!!! 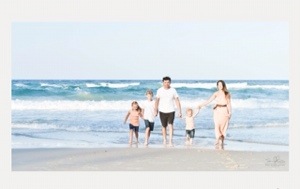