Today I achieved something I thought I never would be able to. Not only because of my heart condition, but I never thought I’d have the ability to. But I do and now I can say I have run a half marathon, without stopping and under 2 hours!!!!

I’ve been working towards this since the beginning of the year with 20k as my furthest run which I did a month ago! I’ve been running 15-17k runs each weekend and slowly increasing my pace. I had actually planned to run 20k next weekend, but with so much rain around this week and I’d only run 5k on Wednesday, I figured my legs would be as ready as they’d ever be.

I spend the last two days fuelling my body with lots of water, protein and of course fruit and veggies. I was as ready as I could be. I got everything ready as I do the night before, which included my water bottle, sachet of fruit and a charged watch and iPod! I woke to overcast conditions this morning which I was completely happy about and set off at 6.15. This is how it played out….

I really thought by not running much this week, my legs would be feeling great – not so much. They were a bit achy and when I reached my first kilometre at 5.15mins I was a bit disappointed. By my third kilometre (which was 5.38mins) I was really disappointed! I even remember saying to myself “oh well today isn’t the day – just get these 20k under your belt!” It wasn’t until I got to the eighth kilometre that I was starting to get a nice consistent pace that I felt in control of the run.

It was during this eighth kilometre that I started to make my way home to fuel my body with water and fruit. I didn’t want to at first as it meant going up two hills which made a total of three hills in the first 9k. But thankfully I kept up my pace and even with a dropped water bottle, which cracked the lid and I lost half my water and I almost dropped my iPod, I stayed on track. But after this comic of events, I started to feel sore again. I found myself thinking again “I don’t think I’ll be keeping up this pace!”

It wasn’t until I saw my time at 11k under an hour that I thought “you might just have this!” From there I kept up my pace. My next aim was to make it to 15k which is where I had the rest of my fruit sachet – and note to self – suck don’t pour in your mouth – not as easy as it seems lol! From this point the rest of the run couldn’t have gone any better.

That last kilometre wasn’t pretty. I was sore. I was ready to stop. I kept looking at my watch every minute and counting down the metres. When I reached 21k I counted down the last 100m from 10 out loud and at 21.1k I stopped my watch and let out the loudest cheer – a couple were walking past and I think I scared them but I didn’t care – I’d just run a half marathon under 2 hours!!!!! 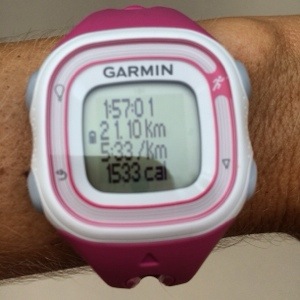 I was in disbelief. I did it…I really did it!!!! And I know that I can do better!!! This week I got the confirmation from my cardiologist to run the Gold Coast half marathon. As soon as he confirmed it and after a check up with my doctor on Wednesday, who was very happy with me, I’m now all signed up!!! I’m so pumped and ready to take on the challenge again. My aim…to beat today’s time:)

To achieve anything all you have to do is believe and never give up!

2 thoughts on “My First Half…”