Are you the sort of person who when told something either wonderful or sad gets goosebumps? I am and this week I’ve had a few of those moments!

With the kids returning to school on Monday it meant I also had to return to work. We had a fabulous holiday together so none of us wanted to part with each other Monday morning, but we did! After Sienna went to bed crying Sunday night because she didn’t want to go back to school and leave me, I went to bed feeling sick. I was expecting something like this to occur, but I was so hopeful that she had overcome the separation anxiety feelings she gets. Thankfully after a bit of a shaky morning getting ready for her first day back, she has been fabulous at school all week! Not one tear has been shed just lots of beautiful big happy smiles! Phew!!!

Tuesday night was parent teacher night. I arrived a little bit early (I know what some of you are thinking – early?? Lol…yes I am capable of being early lol) When I walked up to the lady who was directing all the parents where to go, with a sincere smile she said “are you Bailey’s mum?” very proudly I said “yes!” She proceeded to tell me how wonderful she thought my son was and how much determination he has and that any adult that knows him thinks he is just fantastic! I started getting goosebumps and I couldn’t thank her enough for her kind words. But when she said it’s obvious he has great role models, I stopped for a mere moment and let out a sigh of relief! It was in that moment that I said to myself….the grey hairs, the wrinkles, the bad cop moments, the times when you sound like a broken record have been so worth hearing such kind words about one of my children!

But it didn’t stop there. I had Sienna’s interview first and her teacher said the same thing! Well mannered, caring, kind, pleasure to teach, tries hard, doing well….another goosebump moment! Then over to Bailey’s teacher who claimed the very same things….hard worker, great role model, mature, working above year level standard, we love having him in our class!!! I walked away on such a high!!! The children they were talking about were ours….very different from the ones we sometimes see at home lol….but they were ours!!!!

Then another goosebump moment occurred the very next day when Bailey came home and told me he had been chosen for the third year running to lay the wreath for his class during their school’s Anzac Day Parade. I was so proud of him. And finally I was able to be present for the parade today. He did such a fabulous job and like always he takes any job he is given seriously! 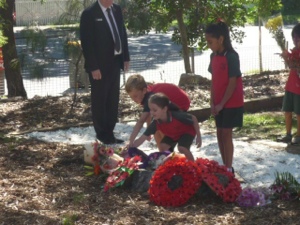 Then there is our littlest one. Well what can I say. She is at the ‘sponge’ age of 2 where she is taking in everything, saying any word that is asked of her, stringing words together, using her beautiful manners, telling us what to do next in the routine, learning her colours and her goosebump moment this week was when she counted past ten for the first time to twelve…fourteen and eighteen then followed but that is awesome too as she knows that teen numbers are to follow. I’m really enjoying our time together when the two bigger ones are at school, but love it even more when we are altogether! 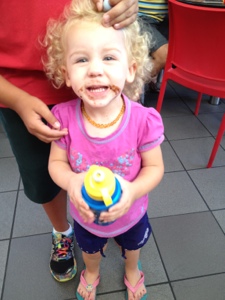 It’s these goosebump moments that make my life so fulfilled. It makes all the sleepless nights worth it. It’s worth the pain you go through to finally be able to hold them in your arms. The tantrums, the billion times we are endured to the word no and the back chatting which I would have to say grinds my nerves the most! And even though parenting is a road full of flat, bumpy curves, with lots of ups and downs, it’s the moments that bring us to goosebumps or tears which usually accompany the bumps, that make this job the best around!